We have identified ten keys points for communications and technology over the next 365 days.

We enter 2017 celebrating ten years since the launch of the iPhone. The jewel of Apple has been one of the most disruptive technological tools of the turn of the century. With this milestone right around the corner, Next Media, the Lavinia Group’s technology and communications blog, has put together a list of the main trends for the coming year.

The first point to keep in mind is that trends do not necessarily lead to disruption. But they can, and we must analyse our expectations. Our focus is on audio-visual services, the development of communications projects, and enhancing elements used by consumers.

Nevertheless, we live in a world in which connection speeds and cloud storage capacities continue improving while also becoming cheaper. In addition, as we saw at the Mobile World Congress, graphene opens doors that until now were hard to budge. Its properties, such as hardness, elasticity, and thermal and electrical conductivity, open a world of possibilities and technical applications such as with batteries, wiring and flexible screens, among many others.

With that in mind, we venture forth with our communications trends for 2017:

Virtual reality continues to be one of the fastest maturing technologies. Developers and companies will continue to explore the possibilities of this technology to captivate more and more users. In Spain alone, the business of virtual reality already generates more than €45m. And the big technology companies (Apple, Google and Facebook) have entered the race.

Immersiveness is rising in value in the audio-visual field. The main social networks are betting on it like never before. Twitter, for example, has just launched 360-degree streaming video for Periscope. Facebook Live will be next.

In a broad sense, virtual reality will move beyond a niche technology. As Mark Zuckerberg said at Barcelona’s MWC, “It is the next frontier,” to conquer new worlds, whether for fun or for therapeutic use.

Augmented reality (AR), on the other hand, will stack other layers of reality simply by using a smartphone. Apple, for example, is focusing on developing new eyeglasses and has not yet ruled out that its next generation of smartphones will incorporate augmented reality in its cameras. Microsoft, for its part, is working with a system called HoloLens.

Yet perhaps the mere spectacle of donning virtual reality headsets will conceal augmented reality, a technology that makes up part of the concept of Mixed Reality. Augmented reality, unlike virtual reality, does not isolate the user, but rather it generates a social experience like what we saw with the Pokémon Go revolution, a global phenomenon indeed.

Online learning (e-learning and instructional contents) is expected to witness a small UX revolution in the coming months. Online training continues to evolve thanks to new audio-visual formats, new technologies, and methodologies that make it not only more attractive, but also more effective. We will see content explained through a comedy series, formats combining images and text, and even illustrated formats. There will also be a greater tendency to learn through games; “gamification” via interactive play or videogames allow users to learn while searching for the solution.

E-learning is hands down the methodology that lets us stay up to date in an easy, comfortable and effective way; anywhere, at any time, and without having to stop working.

A report from the Social Media Marketing Industry highlights that 60% of companies consider video to be a fundamental part of their strategies, while 73% say they will increase video use in the coming year, part of a spectacular increase expected through 2020 – as can be seen in the table that was included in a forecast document from the company Cisco. 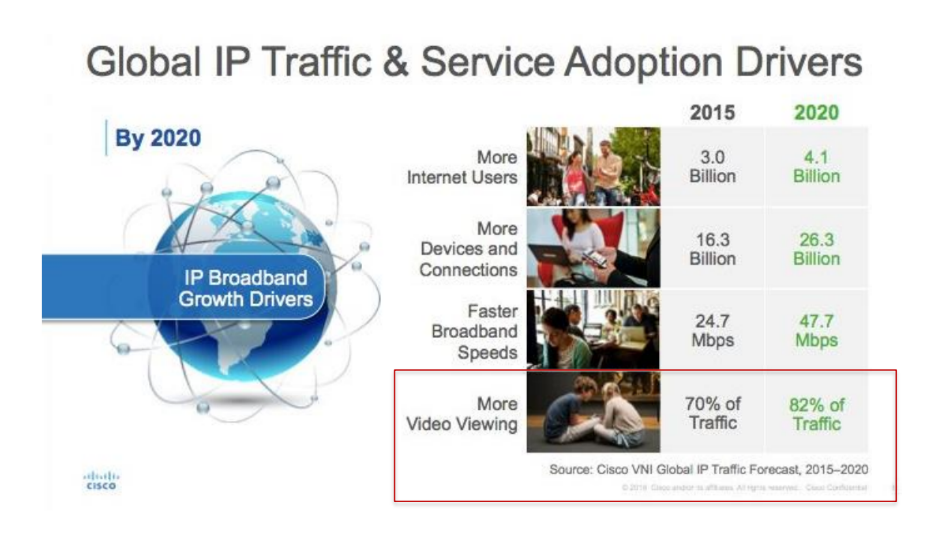 Meanwhile, the presence of video on the internet continues to increase. Every social media platform has made a strong commitment to a format that, with the constant improvement of connection and storage capacity, is already the undisputed king of online content. 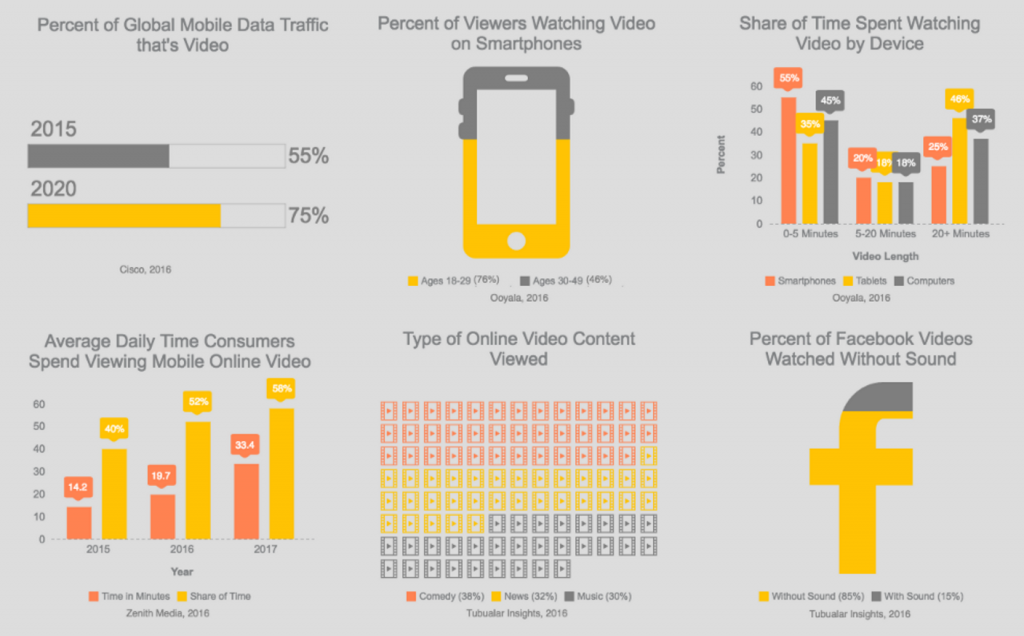 Instagram (Stories), Facebook (Live), Snapchat, Periscope, and YouTube (Player for Publishers) are continually providing new and improved features to facilitate the creation and dissemination of native video content. Particularly noteworthy are the live streaming services offered by Facebook Live and Periscope. We are sure that 2017 will be the year live broadcasts cease to be merely a bet, and, thus, become full-fledged money-makers.

As for the definition of audio-visual content, the year 2017 will be the break-out year for 4K-UHD in both capture and reproduction. This is the latest definition offered by every television on the market today and to which content creators are gradually adapting. Netflix, Amazon, YouTube and Hulu already distribute content in 4K. Spain’s Movistar plans to do so in the first quarter of 2017, while HBO is working on it as we speak. Optimisation of the 4K format comes from HDR (High Dynamic Range) implementation, an improvement in screen brightness that greatly increases image quality. HDR supports several definitions, but this year we will see it associated with 4K. Considering that the maximum definition that can be perceived as unbeatable to the human eye is 20K and that Japanese TV is aiming for 8K for the 2020 Olympics, 4K is, undoubtedly, the definition that will reign supreme in 2017. 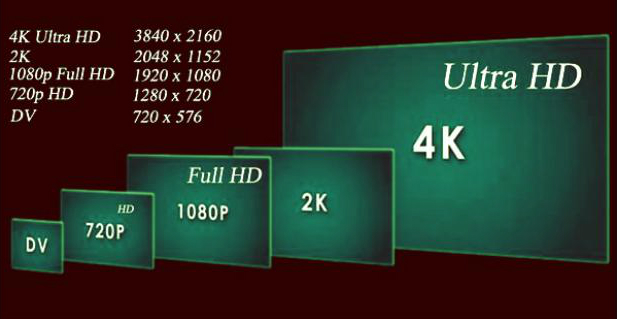 At the same time, broadcasters will continue betting on IP transmission, for which the incorporation of cloud services and the development of 360-degree video will be especially relevant.

While in recent years there have been many new developments that have directed us towards a new pattern of television consumption, the recent launches in Spain of platforms such as Netflix and HBO have definitively kicked-off on-demand television at full capacity. Major content providers are joining the party to add to what is already offered by Apple TV, Amazon Prime Video, and Waki.

The competition between platforms will be fierce in 2017, when we will see to what extent the user will be willing to pay for content on different platforms and devices.

Nevertheless, 2017 will not be the end of traditional television, but a year of coexistence between the two models that will show the way to the future, and which will consist not only of on-demand but also of the aforementioned virtual and augmented realities.

The number of different artificial intelligence applications will multiply to further facilitate our daily life. Among them will be personal assistants, driverless vehicles, home automation apps for connected and intelligent homes, and personalised customer service support.

Virtual personal assistants form part of machine learning — artificial intelligence that imitates the way the human brain learns. But it is not just about learning how to think; it is also about learning how to feel. We are living in a new era, the so-called deep learning era, where artificial intelligence is becoming exponentially more effective and can compute how human emotions are measured, interpreted and simulated.

Digital finance will be as strong as ever, with growth in such Fintech sectors as crowdfunding, crowd lending, online banking, mobile payments, and blockchain technology. The so-called collaborative economy is poised to undergo structural changes in the coming years.

Blockchain, the system that was created to operate with bitcoin, is one example. It is a decentralised database shared between a network of computers, which must approve a transaction before it takes place. Thus, intermediaries like banks are not needed because the information is completely protected and is recorded in a totally open and transparent accounting book so that all users can see it.

It’s nothing trivial, either. A recent study published by KPMG on the state of Hong Kong’s banking industry highlights that “blockchain is growing in popularity for payment and loan services, and we are seeing how blockchain companies are beginning to secure funding.” Blockchain growth in the next year is expected to rival investment in Fintech, the report said.

Advertising is one of the areas that integrates these new techniques and formats with the best agility. Brands, especially those which are the most pioneering and ground-breaking, are open to new ways of connecting with their audiences. The main trends in recent years have made branded content, native advertising, social media, big data, and real-time marketing the most effective options. These techniques, along with ever more suggestive, resourceful and target-oriented content, should serve as the base for current marketing practices while, at the same time, online advertising gets set to face new and complex challenges.

The perception of advertising as invasive, especially in pop-up format, has made ad-blockers a growing ally of millions of internet users while becoming a serious problem for the media and other advertisers. But it isn’t all bad news.

Predictive advertising has become well-established: it continues to be unstoppable and is expected to grow 31% compared to 2016, with Big Data paving the way. Indeed, the future is bright for advertising.

With further progress having been made with electric cars and autonomous vehicles, the future is just around the corner. And it’s not just on our roads but also in our skies. Amazon has just patented aerial warehouses to deliver goods using drones. Andreas Raptopoulos, the CEO of Matternet, a drone manufacturing company, believes that the delivery of products by unmanned vehicles will reach a “turning point around 2020.” Or perhaps before. Legal issues will play a huge role in the transition to a new logistics industry that will emphasise a new form of communication with respect to users.

In an ecosystem as saturated as that of social media, it will be increasingly necessary to distinguish oneself from the pack through good storytelling. And what better way to do it than an audio-visual format. We will, however, go even further in the coming months. Companies, institutions, and brands have evolved towards a communications model based on participation, dialogue, and even co-creation of content. But while participation in the debate is necessary, it is not enough. “This is where I think another concept is needed — Storydoing,” the consultant Llorente and Cuenca points out. “It is no longer enough to say something. You have to do something.”

In this context, there are new challenges for communicators in search of solutions in a world where consumers and/or users are as active as ever.

Case in point: messaging apps will continue to boom — WhatsApp continues to grow by incorporating new features much like WeChat. Chatbots and Artificial Intelligence will be increasingly present in our lives, including on social media. And thanks to Big Data they will have relevant information on each user that they will use to facilitate their user experience, showing them, for example, content of interest and using new simultaneous translation tools. Ephemeral content will continue to battle it out on Snapchat and Instagram Stories, becoming ever more original to avoid being left behind in the race to launch new products, much like the famous Spectacles.

Storydoing is about interaction, rather than mere narration; and about action, in the face of mere contemplation.